An AIR-programme grant from Nordic Culture Point has made it possible for EMS to invite Hafdís Bjarnadóttir to work at EMS in 2013 and 2014.

Hafdís Bjarnadóttir (b. 1977, Reykjavik) graduated in jazz guitar performance from the FÍH School of Music in Iceland in 2002. She earned a bachelor’s degree in contemporary composition from the Iceland Academy of the Arts in 2007, followed by a master’s degree from the Royal Danish Academy of Music in 2009. 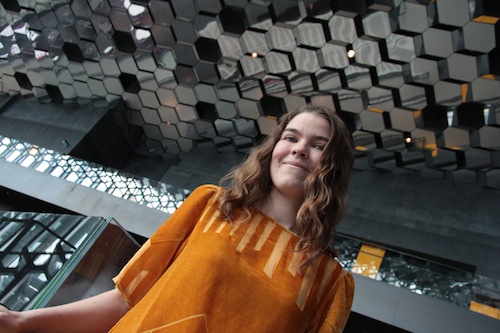 With a reputation for breaking down barriers between different genres of music, her past projects include a sound installation for the Nordic Lighthouse at the 2010 World Expo in Shanghai; an orchestra piece based on knitting instructions; two solo albums mixing different genres and domains of instruments; an ensemble piece based on financial graphs and charts from Iceland’s 2008 banking crisis; various commissioned pieces for solo instruments or chamber ensembles; a piece for a mixed choir and electric guitar. Her second solo album, JÆJA, received critical acclaim and was nominated for the 2009 Iceland Music Awards. Her piece for accordion and halldorophone, “A Day in February”, was nominated by the Icelandic National Broadcasting Service for the International Rostrum of Composers in Vienna in 2011. She lives and works in Reykjavík.