Peter J Evans (b.1976 Oxford, United Kingdom) is interested in the nature and ideas of finite truth in an infinitely changeable universe and works with drawing, sculpture, installation, performance and sound in an attempt to make sense of the ungraspable realities we live within. 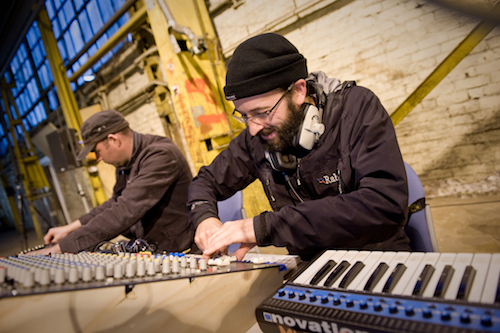 He describes himself as a specialist in non-specialism and has been making both music and art since 1992. Until recently Evans kept a distance between these two fields of production but is now bringing all his concerns together, his exhibition at Baltic39 last year featuring didactic oak panels alongside computer controlled spinning pentatonic bells and wall drawings facing a collaborative sound work with Laura Cannell, Rhodri Davies and Mark Fell.

He will be in residency in Stockholm from the 25th August till the 16th September, constructing a new body of work for an exhibition at Hangman Projects in October.

Fascinated by systems and patterns, Evans’ artistic process is a meditative investigation into reality and the stories underneath the everyday surface of things. The lines in his drawings are metaphorical maps that mark out and describe interactions between objects, atoms, emotions and places. Each line is, and represents, a path that has been travelled and the changes which occurred during the journey.

Peter J Evans was born in 1976 in Oxford, U.K. and lives and works in Newcastle upon Tyne. He attended Dartington College of Arts from 1995-1998 earning a BA (Hons) in Visual Performance, later gaining an MRes in Digital Media from Newcastle University between 2008-2010. He is represented by Workplace Gallery.