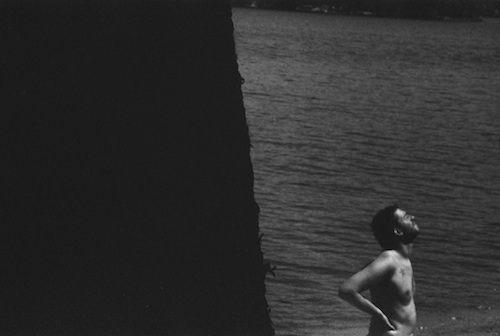 Lanthier was raised in Montreal and been active as a sound artist since 2007. His most recent album, 'Otherwise Insignificant Psyche Debris', is comprised of 22 live recordings from over the last few years and and was released as a cassette via labels Hobo Cult and MIND Records. Focused on the concept of dispositional emotional regulation, the body of work deals with acceptance, avoidance, problem solving, reappraisal, rumination, and suppression. It contains remixes by Grischa Lichtenberger (Raster Noton, Semantica), Vereker (L.I.E.S.), Hobo Cubes (Debacle, Digitalis, Opal Tapes), VNDL (Kvitnu, Hymen), and Robert Lippok (To Rococo Rot, Raster Noton) and is mastered by Vladislav Delay. It acts as the "exaggerated and terminal" follow-up to the collection 'Athenaeum of Unedited, Superannuated, Incomplete, Unreleased, Intimate Works 2011-2013', an intimate selection of more beat-driven pieces, again taken unedited from the main front-of-house mixing boards at his shows in Montreal, Berlin, Barcelona, and Nottingham. Also released in cassette tape format by Hobo Cult Records, the works cycle from dub-influenced techno to static waves of noise, always textural, and with no trace of simplified, predictable formats. About all of his work he writes, "Interfering with current compositional, performative and significative processes; I strive to create material which resurges from the ever-declining usefulness, originality and value of established musical structures. Through this exploration of contemporary tendencies, I aim to make music which engenders different cognitive responses than those engendered by established music, but which is all the while accessible through the modification of recognizable tools used in that very music. For instance, instead of using a platform or mold of dance music in order to make people move, I might use it to prompt a certain feeling, state, understanding, or aesthetic. I aim to use the tools which are available to me through contemporary music in order to reach a different and individualized end. Please take with a grain of salt."