Lucy Railton and Russell Haswell met 2013. In February 2014, they recorded at BBC Maida Vale Studio for a Radio 3 Late Junction Session, where they fused virtuosic Xenakian cello technique with hybrid analogue/digital synthesis. They have since featured at Haus der elektronischen Künste, Basel and in residency at Dark Ecology, Kirkenes in association with Sonic Acts and Borealis Festival. 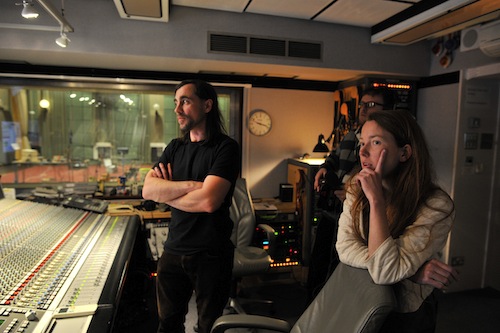 Cellist Lucy Railton is a soloist, curator and collaborator. She trained at the New England Conservatory in Boston, and the Royal Academy of Music in London, graduating in 2008. Lucy has since been one of the leading figures in the performance and development of contemporary music in the UK. Her curatorial history includes shows at the ICA, founding and directing the Kammer Klang series, and co-directing the London Contemporary Music Festival.

Artist Russell Haswell is a record producer, free improvisor, computer musician, noise aficionado, curator and collaborator. He trained at Coventry School of Art, graduating in 1991. Russell has focused on performance and methodology of large scale sound works, sometimes in surround. As a curator, he has delivered projects for PS1/MoMa, All Tomorrows Parties, Aldeburgh Music and Thyssen-Bornemisza Art Contemporary.