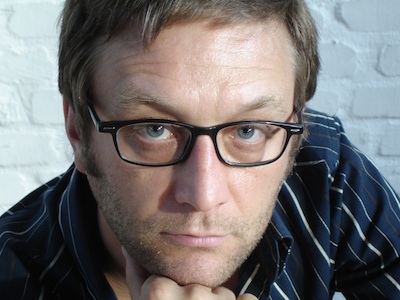 Alex Nowitz studied music, in particular voice and composition, at universities in Munich, Berlin, Potsdam/USA and Potsdam/GER. In 2000 he graduated at the University of Potsdam (GER) “with first class honours”. From 2007-2011 Alex Nowitz was artist-in-residence at STEIM in Amsterdam where two instruments were developed and built for him: the Stimmflieger (2 Wii-remotes, software configuration together with Daniel Schorno) and the Strophonion (2 controllers built by STEIM, software configuration together with Frank Baldé). In 2009 Alex Nowitz won 2nd European Competition for Live-Electronic Music Projects of the ECPNM in Gothenburg at the ISCM for composing and performing the Minotaurus for voice and live-electronics (Stimmflieger). He received prizes, grants and artist residencies by institutions such as EMS (Stockholm), Leighton Studios Banff (CAN), Ministry of Culture of Brandenburg (Germany). In 2014 Alex Nowitz will be resident at the Cité des Arts in Paris supported by the Ministry of Culture Germany.