Muyassar Kurdi is a Brooklyn-based interdisciplinary artist. Her work encompasses sound, extended vocal technique, performance art, movement,
photography, and film. She has toured extensively in the U.S. and throughout Europe including the Netherlands, Denmark, Italy, France, Switzerland,
Germany, Austria, Poland, Czech Republic, Spain, and the UK in both England and Scotland.
At EMS she will be working on SEVEN VOICES, a multi-channel series of lullabies- cyclical and microtonal in form: layers and textures of voice in space
that is centered on embodiment and ecology. The multitude of voices carry each part of a whole which separate, follow, fall apart, and come together
in a dance of interdependent dualities. 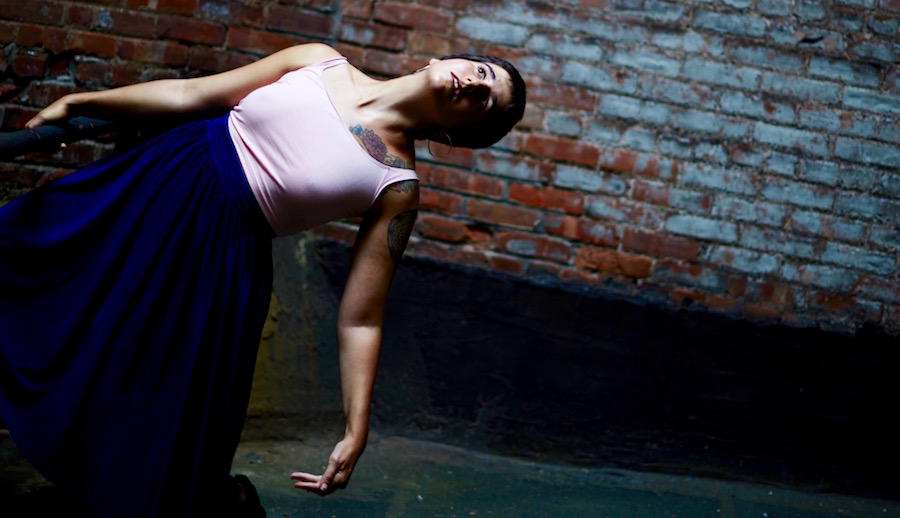 Photo by Gianna Leo Falcon, NYC
A versatile improviser, Muyassar has composed and performed music for voice, harmonium, piano, lyre, autoharp, and theremin in both solo and collaborative
environments. She currently focuses her attention to interweaving homemade electronic instruments and sculpture into her vocal and dance performances,
stirring a plethora of emotions from her audience members through vicious noise, ritualistic chants, and meditative movements.
Kurdi studied voice and dance with legendary vocalist and dancer Meredith Monk via The House Foundation, as well as learning the Japanese dance tradition
of Butoh with Tadashi Endo, director of the Butoh Center MAMU and with Mexican master of the form, Diego Pi​ñ​on, among others throughout Chicago, NYC,
Berlin, and Vienna. She currently studies with Juilliard faculty member Janis Brenner, also a member of the MM Vocal Ensemble.
Kurdi received an artist-residency in Berlin at Liebig12 in February 2017 performing new works as well as curating her series MACHINE//BODY
which has also premiered in Chicago and NYC with a focus on connecting sound, movement, and performance. Kurdi was the recipient of the Garrison Institute
scholarship to study further with Meredith Monk in the Winter of 2017. Performance highlights include: The Rubin Museum of Art, Issue Project Room, Cafe OTO,
Chicago Cultural Center, Center for Contemporary Art Laznia, Bond Chapel, Fridman Gallery, and University Galleries.