Attilio Novellino is an Italian sound artist born in 1983.  By using analog and digital instruments, field recordings, harsh distortions, samples and white noise, he aims to build a psychoacoustic and chaotic dimension around the subtle perception of the “feel”, that has been called a "dronegaze".  Over the last years, Novellino has released solo albums for Valeot (Au) and Small Doses (USA) and he has contributed to many compilation projects focused on drone and ambient music from a range of international labels, such as Basses Frequences (Fr), Consouling Sounds(Be), Futuresequence (USA).  His new LP will be released by IDEA Records (USA) during 2016. 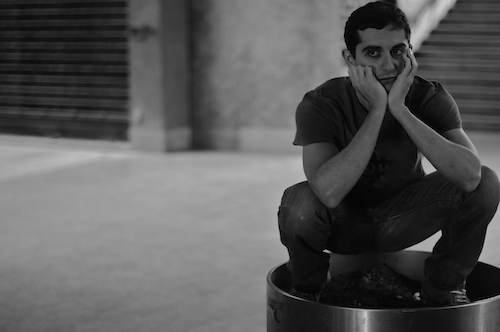 Attilio's residency is kindly supported by the Italian Culture Institute in Stockholm.

He has joined Alberto Boccardi's project Sanlupo, for choir, cello and electronics, in collaboration with Nicola Ratti, Matto Bennici and the Antonio La Motta Chorus , that premiered on November the 17th, 2012 in the unique setting of the former Oratory Sanlupo, Bergamo, for the “Invisible Show” series. He has released two studio album as Sentimental Machines, on Laverna (It) and Dronarivm (Rus).

In 2103, the jury of PIARS – Sonic Arts Award – composed by David Toop, Gunter Muller and Rhodri Davies, awarded the first prize to Novellino/Panico/Rosi for the experimental music composition "Black Sand". “Black Sand” was also transmitted at the Sweet Thunder Music Festival in San Francisco on April 2014 curated by Tom Erbe, one of the most sought after and respected sound engineers for contemporary music and the programmer of the "SoundHack" software. From October the 5th to November the 30th Novellino's work Lost Days has been used for sound installation, through a wireless headphones diffusion, into art space called Cecilia in Tito (PZ).